Now celebrating our thirty-seventh year, WOMAD is still a glorious melting pot of music, dance, food, art, spoken-word, poetry, science and more; embracing the joys of diversity and tolerance at a time when the world needs it more than ever. This year we are very proud to bring you Ziggy Marley, Macy Gray, Orbital, Salif Keita, Anna Calvi, Saving Grace with Suzie Dian and Robert Plant, and Thursday headliner Afro-Cuban All Stars, alongside a jam-packed line-up of incredible musicians from across the world.

On Friday, reggae superstar Ziggy Marley will bring the richest Jamaican heritage with his soulful and empowered sounds. Also, headlining Friday, soul sister supreme and Grammy-Award winning singer Macy Gray appears twenty years on from her global smash I Try, the gravelly-voiced legend will be bringing her smoky jazz and R&B-tinged pop to WOMAD 2019.

Saturday will see dramatic virtuoso guitarist Anna Calvi (UK) bring her queer, beautiful and thunderous sounds. Playing slightly earlier in the day will be the ‘golden voice of Africa’ Salif Keita (Mali). The Malian afro-pop singers cocktail of pop, funk and jazz and African rhythms will set the stage alight.

During Sunday we are very excited to welcome rock icon Robert Plant with his brand-new collaboration Saving Grace featuring Suzi Dian and Robert Plant, an intimate, warm and soul-stirring live show that promises to be a very special moment. Closing the main stage are Orbital (UK), the homegrown house and techno legends will be bringing their amazing live show to continue their reputation of famed live shows that have transformed festivals across the globe.

Make sure you purchase a 4-day ticket and get transported to old Havana with multi-generational Latin supergroup Afro-Cuban All Stars, they kick off the festival on Thursday night with revived and refreshed sounds from the golden era of Cuban music, whilst mixing in contemporary dance rhythms to create the ultimate Latin-Caribbean party.

Across the rest of the festival, we will be treated to a curated selection of the worlds best music. A perfect example is Calypso Rose, the undisputed Queen of Calypso whose career has spanned over sixty years but shows no sign of stopping. With scorching tunes and biting social commentary, this veteran performer remains every bit as prolific and fiery as she’s ever been. Funk legends Cymande (UK), are another act who combine the best of western and African musical traditions, and who recently reunited after a four-decade hiatus. Joining them will be the energetic, passionate Afro-punk band Tshegue (France/Democratic Republic of Congo) whose mix of tribal sounds with garage rock have made them one of the hottest groups on the Parisian scene, led by the astonishing Faty Sy Savanet.

Reggae reigns strong at this year’s festival, as the remarkable Brushy One String (Jamaica) joins the line-up. Orphaned and illiterate as a child, he played his guitar so hard he broke five of its six strings, and consequently went on to accomplish more with one string than most people can do with six. Decades later he brings the style that carried him from his Jamaican township and around the world. Also representing the Carribean, the trio Delgres’ (France) fusion of hypnotised rock, earthy soul and caustic garage, links French, Caribbean, and US cultures.

Petite Noir from South Africa is a force of nature already, he hit international airwaves in 2018 with his single Blame Fire, gaining critical and commercial success. Also making waves are Les Filles de Illighadad (Niger), the first ever all women “Tuareg” (or Desert Blues) band. From a tiny commune, their ancient and passionate music speaks to a proud and ancient tradition that is descended from centuries of songs that tell the remarkable story of the Tuareg people. Acclaimed singer, composer and oud player Dhafer Youssef (Tunisia) combines mystical and jazz influences with Arabic lyricism and electronic, funky grooves to achieve beautiful sounds, whilst Nadine Shah (UK) draws on her Pakistani/Norwegian heritage to create a brooding and intense blend of pop and jazz-kissed post-punk.

Siblings from South Sudan Emmanuel Jal & Nyaruach have overcome harrowing and tragic circumstances to get where they are today; the rap duo now use their fast-paced, politicised lyrics to articulate their concerns of their still-troubled country. Joining them on the line-up will be one of the emerging stars of Nairobi’s vibrant music scene, Muthoni Drummer Queen (Kenya) who is fast becoming one of the more strident voices articulating the urban African experience.

Melding theatre and music and a firm WOMAD favourite, DakhaBrakha (Ukraine), the folk quartet whose raw, expressive sound jumps from intimate to riotous in a moment. Their performances are usually accompanied by the traditional instrumentation of India, Africa, Russia, and Australia and led by powerful and emotive vocals. Keeping the energy levels high, the frenzied and wild ensemble Canzoniere Grecanico Salentino (Italy) has been at the forefront of reinventing and revitalising traditional Southern Italian Pizzica music.

Soul and R&B come together beautifully with Liniker e os Caramelows (Brazil), a band from inner-city Sao Paulo who, unable to afford studio time, have their passionate fans to thank for crowdfunding them and giving them the opportunity to record their first album.

Adventurous electro-psych-pop from Celtic group Gwenno will be electrifying with songs in both Welsh and Cornish, whilst Georgian six-piece Iberi Choir use traditional instruments and polyphonic singing to showcase the hauntingly beautiful folk traditions of their homeland. From the other side of the Atlantic come funky and energetic Moon Hooch (USA); consisting of just two saxophonists and a drummer, their sound is big, innovative and awesome.

The world’s festival is also honoured to welcome Ustad Saami (Pakistan), the last living master of Surti, a style of music nearly 1000 years old, regarded as blasphemous by some religious extremists who have made threats on Ustad’s life for performing the ancient art.  The music dies with him, so his WOMAD appearance is a once in a lifetime experience.

This is just a snap shot of some of the incredible artists that make up the programme for WOMAD 2019. We hope you enjoy discovering them as much as we have. Check out the line-up poster below or head over to the line-up page to learn a bit more about each artist here.

Delve deeper into the line-up with the Spotify playlist here. 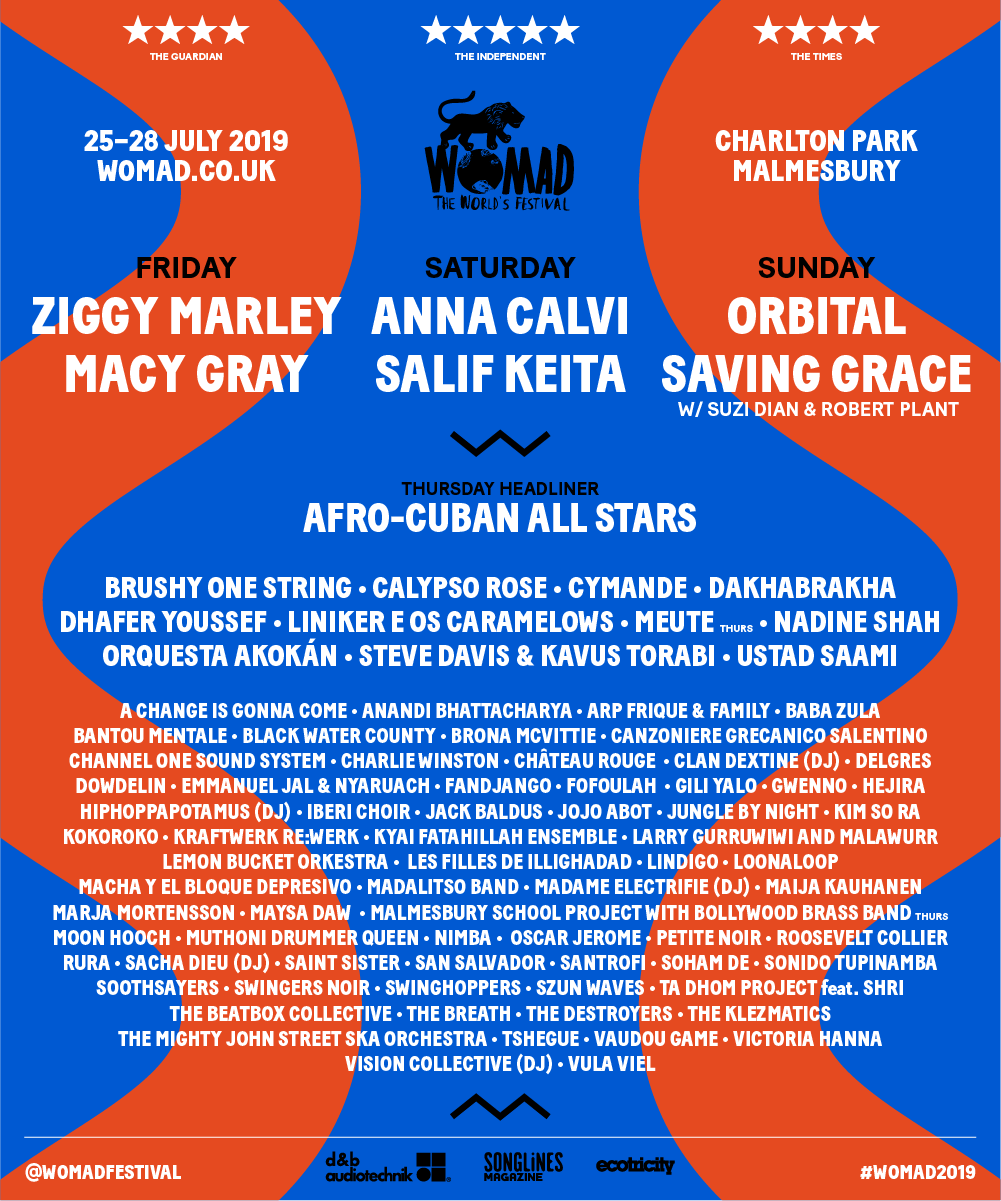 We use cookies to optimise your site experience. By interacting with our site, you agree to our use of cookies. View our Policy to learn more

A message from Peter Gabriel

Like many others, we have been hoping, waiting and watching the Coronavirus situation. Finally, we have been told that we will not be allowed to hold WOMAD this year at Charlton Park.

Safety for all of our festivalgoers, artists and our own staff surpasses everything.

All of us involved with WOMAD have already been really touched by the help and generous offers of many of those we depend on to make the festival come to life. Many of the artists have already offered, or agreed, to play for us next year and we will now put our energies into making a great WOMAD 2021.