The WOMAD programme is a prized possession which we know decorates coffee tables for months after the festival. It houses features on the artists, intimate interviews, Q&A’s, and up to date timetables for most of the festival. However, this year we have a very special treat for you. We have enlisted the help of Marc Bessant, whom for those not in the know, is Peter Gabriel’s go-to designer. Marc has worked on classic Peter Gabriel albums such as Up, So and New Blood; you might think of him as a bit of a superstar in the design world.

We were thrilled when he agreed to work with us on our programme and exceptionally pleased with the bespoke artwork he produced for the front cover. After we had finished with lot’s of “mmmm’s” and “aah’s” we had some questions about what we were looking at. Marc very kindly came in for a coffee and a chin wag and gave us the low down on his artistic process. Enjoy. 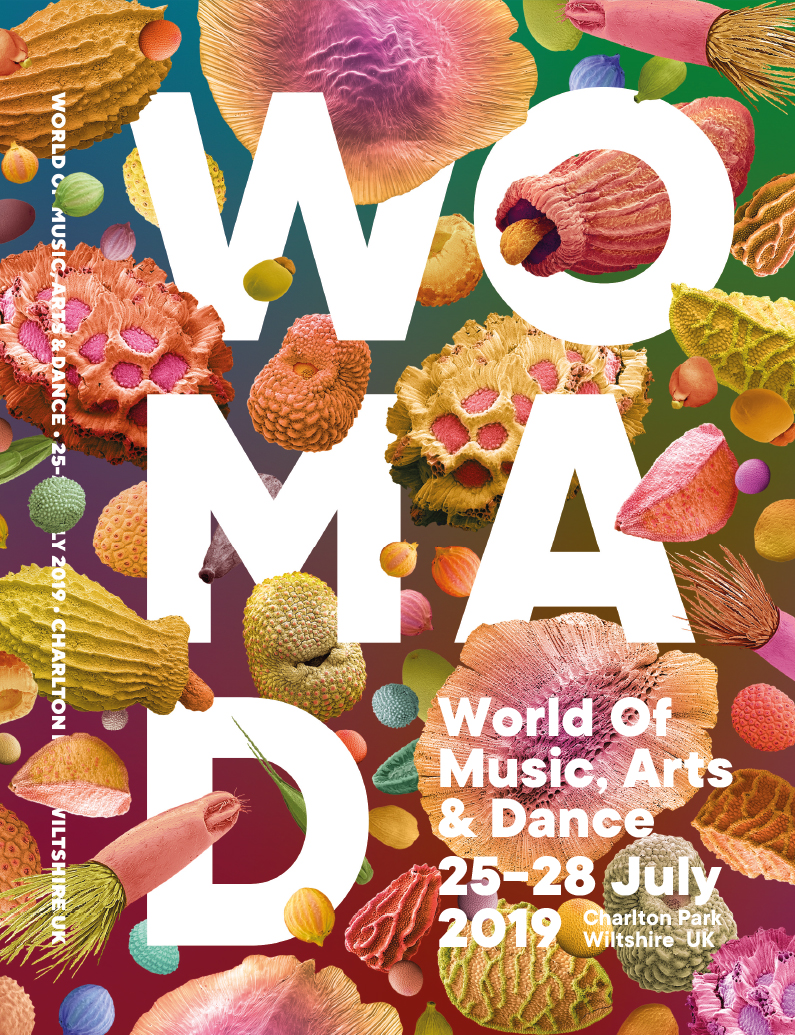 We love the artwork for the front cover. Can you tell us a little about it?

One of the many things I’ve always associated WOMAD festivals with is its closeness to nature, and in particular how we – human beings – take time away from our busy urban lives and jump feet first into it – quite literally wondering amongst fields and woodlands for hours, allowing our senses to stretch. Coupled with the continuous discovery and eclectic mix of music and events encountered at WOMAD, I was keen to create an almost naturally psychedelic looking piece of work. I was familiar with the electron microscopy of Steve Gschmeissner, having worked with him before on a Peter Gabriel record, he’s incredible at what he does (see his website www.theworldcloseup.com) and the images he manages to photograph never ceases to amaze me, Steve set about scanning various flower and grass seeds which were then cut out and falsely coloured (originally they are grey tones) and then scattered amidst the typography to complete the boisterous cover. 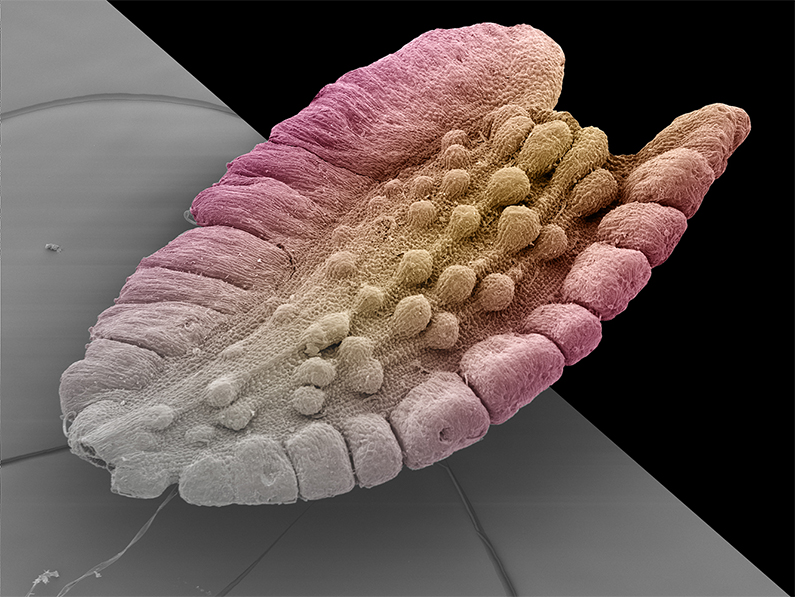 A photo of one of the seeds that Marc has partially coloured. The photos arrive in greyscale and Marc painstakingly adds colour, bringing them to life.

When you are producing album art, how has your process changed from when you started out?

The biggest change in the design process has been the computer. Starting out, everything was cut and paste – for real, the mac changed all that (not always for the better), things became quicker thus deadlines got shorter. Also, people are more familiar with design, never has there been a time when we are subjected to so much of it, its a constant flow which makes for a bigger effort to get your head above the surface.

You have worked on most of Peter Gabriel’s album covers. Have you got any interesting tales to tell about the man himself?

I’m not one for telling tales, but I can tell you Peter has always been incredibly supportive of my work, he’s worked with the best so I consider myself lucky he comes back for more. A designer I greatly admire (Stefan Sagmeister) once told me the best artists are often the most generous, this is certainly the case when it comes to Peter. 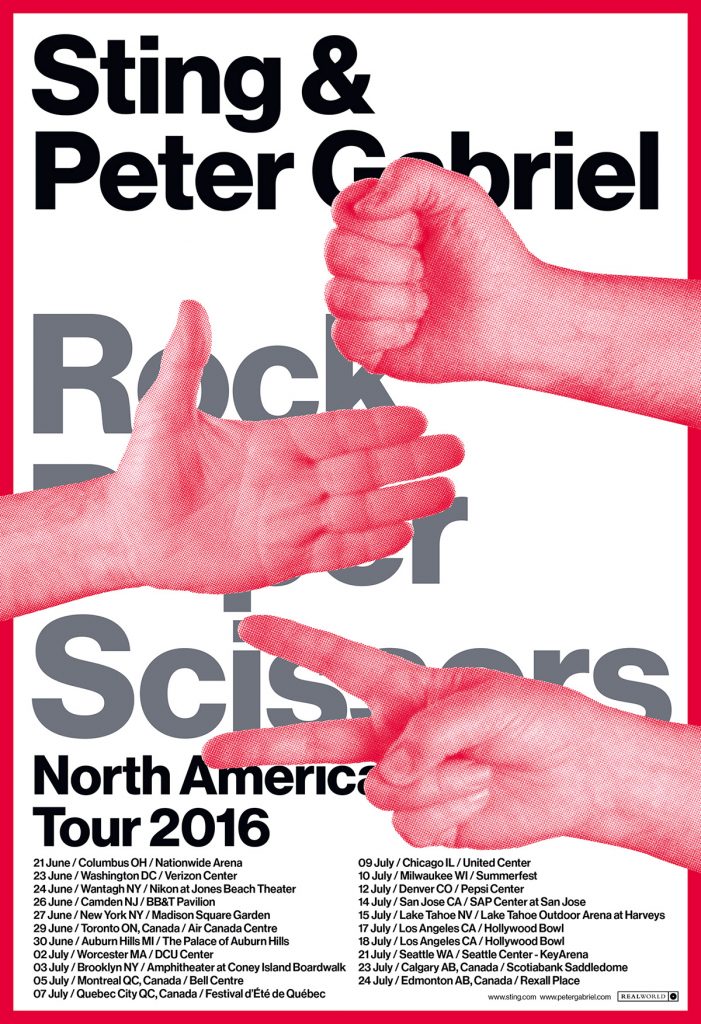 When did you begin working with WOMAD festival and how have you seen the Festival change?

I first worked with WOMAD in 2000 and have continued with your various festivals around the world since (in one way or another). It has always been an eclectic mix of sights and sounds – a strength it rightly continues to pursue. Its got bigger as the world has got smaller, obviously, but its values remain the same, curiosity and discovery is timeless.

What’s your favourite album cover you have and haven’t produced?

Its difficult to choose one cover I’ve done that I like the most, each has something I felt went right (usually balanced by something that wasn’t) – I always like looking at the second Beak> record, there is nothing to it but it’s utterly determined to make a noise.

One I wish I had done is an even tougher choice, there are brilliant records coming out all the time – however, I love the sleeves from the ECM label, I don’t tire looking at those. Perhaps the polygon package of the Gil Mellé soundtrack to The Andromeda Strain, I don’t know who designed it but it’s genius.

Who are you listening to at the moment?

Right at this very moment, I am listening to ’Two Mules for Sister Sara’ by Ennio Morricone.

Now you have worked on the WOMAD programme, is there anything you are particularly looking forward to at the festival?

One of the benefits of working on the programme is I get to see who is playing in advance, there is a lot in there and often I end up on YouTube seeing/hearing what the band is all about – someone who definitely caught my ear was the techno-marching band Meute and there’s also Roosevelt Collier, and DJ Steve Davis certainly knows his tunes … it’s gonna be a few late nights …

Make sure you grab a copy of the programme which will be on sale at the entrance to the festival, at the merchandise stall, and there will be sellers roaming through the audience. Don’t miss out on your own beautiful copy which will cost £10.

Check out Marc’s work over on his website here.

We use cookies to optimise your site experience. By interacting with our site, you agree to our use of cookies. View our Policy to learn more

Keep up to date with all the announcements for WOMAD 2020 by subscribing to our Newsletter.